Why you shouldn’t name the emotion

When I work with coaching clients, we often have to work on how they should write their characters’ emotions.  Especially when writing a first draft, it’s easy to tell your readers how someone feels.

Sarah looked at Dan. She felt sad and helpless.

Readers will experience the emotions in a more deep way, however, if you can let them experience them, not just tell them what to feel. You need to immerse your reader in the character’s thoughts and actions. When we feel an emotion, we rarely state it to ourselves. An emotion is often a summary of a situation that we look back and realize we felt. At the time of experiencing the emotion, we rarely identify it. Sometimes, the act of identifying it can help us move out of the emotion and make a plan for what to do next, and that can be a useful tip to remember with your characters. You can name the emotion, but first, show them living that emotion, so your reader can experience how that feels too.

Sarah looked up at the man she had loved her entire adult life. She thought of the wedding dresses she had circled in magazines back when he first told her he loved her. She thought of her gran, who had passed away last year, who had told Sarah how proud she was of picking a great man to live her life with. There were 20 years between this cafe and the one they had picked for their blind date, but she had that same feeling in her stomach now – was this where life changed forever, once again?

Sarah closed her eyes to keep the tears from falling. The sound of her heartbeat roared in her ears so loudly that she could barely hear Dan anymore. Biting at her lip, Sarah prepared to talk, not needing to listen to what he had to say. She had been there when he’d had this same conversation with Mary, five years ago. She had fiddled on her seat then, just desperate for it to be over, so she could jump up and run away from Mary, so they could announce their love to the world. Now Sarah could feel her legs heavy against the chair, and she wondered if she’d ever be able to lift them up again. 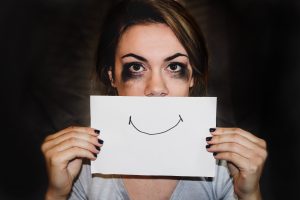 How to practice showing emotion in your draft

If you’re ready to start practicing writing emotion, pick a section of your manuscript, and find a place where you’ve listed the emotion. Now, write a list of physical sensations the character might experience. We rarely experience emotion as a static response – it is usually felt in our body through the actions we take. Each person also experiences these emotions differently. One character might feel anger and hit a wall. One character might internalize it, say and do nothing, but be unable to sleep that night. If you watch people around you, you’ll see a vast array of ‘tics’ we act out without realizing it. This is often how we ‘let emotions out’ of our bodies.

When you start writing this list, you will probably find some generic examples of feeling that emotion. Don’t stop there. The authentic actions your character will take are unlikely to be in the first few ideas you write down. Keep going, and think about who your character is, what has happened in their backstory, and how you picture them. Keep adding to your list. Think about what they don’t do, that others might, to help narrow it down. Sometimes, highlighting what they aren’t feeling can show your readers what they are feeling by exposing that unexpected twist.

Here is an example from “A Time Traveler’s Theory of Relativity” by Nicole Valentine:

[Finn has just found out that his gran has died, which reminds him of his twin sister dying and his mom disappearing just a few weeks before]

“He couldn’t say anything. He was falling deep inside himself. He no longer felt wet and cold. He was hollow, full of echoes. Falling, with nothing to grab on to.

Even when listing the expected experiences, no emotion is documented. And yet, we know exactly how Finn feels.

Write a list of what secondary or even tertiary emotions they are experiencing.

There’s a generally accepted list of primary emotions, being:

And within each of those are secondary, and even tertiary emotions that different people feel in different blends. When one particular character experiences anger, for example, they may feel outraged and distrusting. Another may feel jealous and there may be hurt there that the character is trying to hide.

Here is an emotion wheel that gives examples of these different emotions: 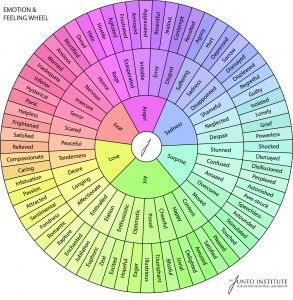 Write down the different emotions your character is experiencing, and then think about what actions they are likely taking because they feel that way.

If we tell our readers that our character feels love, it is unlikely the reader will feel that deep inside them. But if we show the character performing a tender action, and feeling safe and supported (especially if that is not something they’ve felt up to this point in the story)  we as a reader get to feel those emotions with the character, and they resonate much more.

Have you struggled with showing and not telling emotions? Let me know if you try any of these exercises, I’d love to know if they help!